A Genealogy of Cooperation” by Mohammad Bahiraee 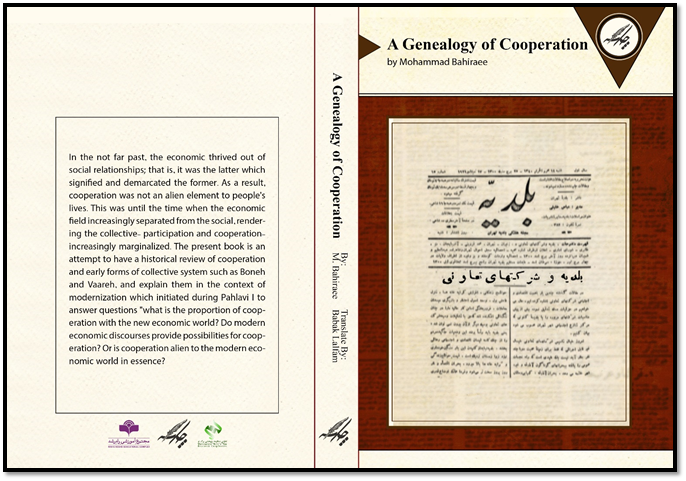 A Genealogy of the Cooperative in Iran

This book is a valuable thought-provoking work which primarily delves into the issue of cooperation in Iran, and then turns to the Iranian cooperatives' current status and its suchness through a historical documentary approach. Cooperation as a way of collective living and a fair economic system has deep roots in the past and vital implications in our today's life. It is a mechanism to unravel the old dilemmas of individualistic and capitalistic extremism which have turned the world to an unequal competition field. In the midst of today's tumult where capitalist order and logic of profit steer our social life, learning about an alternative economics, especially a participatory one, would provide the possibility to help the world toward a more just and humane one. Browsing the Iranian history is a key to understanding the current status of the cooperative in Iran; although such an approach has rarely received due attention. The book's main trajectory goes through the ups and downs of the cooperative in Iran- from the collective social forms down to its bureaucratization as a feature of modernization. Therefore, the publication of this book is to be considered as an attempt to rediscover a cooperation-oriented economics by delving into its possibilities and capacities to build a better world.

The outstanding feature of the book is its systematic references to historical documents and evidence to reconstruct the path which has led to today, and hence shedding light on the current moment. In this regard, revisiting the old is vital because it would bring to light historical capacities and traditions which have been the representations of collective life. Access to these traditions renders obsolete the necessity to imitate modern non-indigenous patters which tend to be ineffective. Therefore, the knowledge hence gathered bridges the past to today and today to tomorrow. Such a research in fact makes the reader's mind ready for a more fundamental question: What are the spheres whereby the cooperative can produce alternative mechanisms to go beyond the current symbolic order and create a new status quo? A Genealogy of the Cooperative is the right stuff for those who are interested in the areas of cooperation, participation, and the process whereby the old order converted into the modern one.

In the First chapter, Problematisation of the controversy, the author sets the context by stating that the economy was a function of social relationships. The cooperative movement was marginalized from the mainstream due to the decoupling of the economy from society. He states that cooperatives exist in two different ways: one, where they have minimal association with the mainstream economy of capitalism and bureaucracy; and the other, where modern cooperatives assume capital relations and hierarchical order.

The second chapter, Collective work in a non-capitalist economy, explores the formation of “Vaareh” and “Boneh”, the two collectives in Iran. “Vaareh” is an informal cooperative system mainly run by women and based on collective mutual help. In this system, families owning livestock pooled their milk and set up dairy cooperatives.

The economy was based on production of goods for the sake of using them and not for accumulation and further profit. Excess production thus was not an issue and in the rare case it happened, non-contributors could benefit from it.

The cooperative economy stood out as one where social and economic relations were inextricably mixed, with the rejection of consumerism and tending towards redistribution in cases of surplus production.

In The advent of progress discourse, a change in the cooperative dynamic is noted, with a shift from the ‘collective’ to the ‘individual’ and consumerism. The subsistence economy was being looked down upon and the earlier concept of labor (involving engagement which didn’t necessarily associate with income) transformed to that of a job.

In the next chapter, The Birth of Cooperatives and The Hatching of another type of Cooperatives, the author explores the inclusion of cooperatives under commercial law and its repercussions on the cooperative economy. Cooperatives in their natural character were not seen as useful and to be so, they had to be instrumental in wealth creation and increased production. Cooperatives then became means for the government to gather statistics and learn about rural populations